about the art
ART
by
I was born in 1950, at Glendale California into a career navy family. While growing up we were stationed mainly in the Washington DC and San Diego areas, And it was there I developed my life long interest and love of ships and trains. After serving in the Army's Nike Missile Program in the late 1960's, I went on to a career in computers working aboard many Pacific Fleet ships. While concurrently serving in the field artillery of the CA National Guard. In 2002 we relocated to the Eastern Sierras. In 2005 we moved to Gardnerville Nevada, where I started a full time art studio.

In 2007 I began writing about the ships that I'd painted, modeled, and studied for so long. In April 2008 I published my first book title. Apart from painting and writing, We also enjoy reading, working out at the local gym and martial arts. As well as dining out and traveling Nevada and the West. I currently reside in Nevada with my India born wife Swarn, and the family cat Tasha. 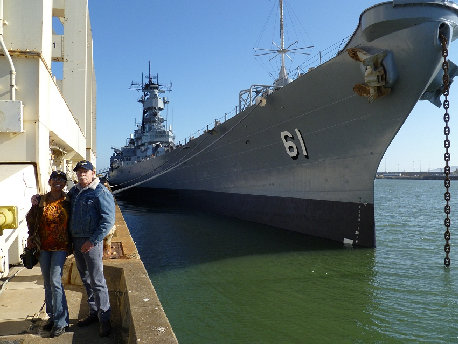 The artist wishes to thank the many plastic model kit box top artists from Revell, Aurora, Lindberg, UPC, Renwal and Pyro of the 1950's and 1960's for providing the inspiration and impetus for my art efforts. Joe Kotula, Ray Gadeke, Jack Lynnewood, John Steel and In particular Anthony 'Scott' Edison for his 1954 Revell USS New Jersey box art which was, and still is the original link that led to this website. After sixty plus years I can still remember being an awestruck 7 year old standing and admiring that box top painting at the local Western Auto. And promising myself someday I too was going to paint ships like that.

The artist and wife at the USS Iowa BB61 in May 2012 while the ship was in Richmond CA. We did a number of art shows aboard the ship while she was there.